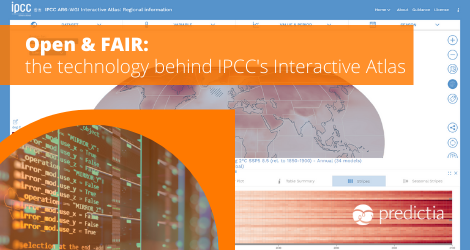 A month ago, the final version of the Interactive Atlas of the IPCC was unveiled. Now that the dust has settled, we want to provide a peek into the technicalities behind its implementation. After all, we learnt some lessons after processing hundreds of TBs (with over 1.5 million hours of computing time)  that we want to share with you. This will be a long post, so we have splitted it up into some sections, for those of you that are interested in some specific aspects:

If you look at the stack of technologies on the image, you’ll spot that a lot of the software is Open Source. Relying on open solutions is one of our core philosophies at Predictia. So, together with the Climate Research Group at IFCA, we made a strong point on using open solutions from the beginning. Some of them lie at the very core of the Interactive Atlas:

Thanks to these solutions that were already there, we didn’t have to reinvent the wheel: we just had to focus on integrating the technological pieces of the puzzle. Thus, we were able to dedicate more efforts to other areas, like Quality Assessment. However, in the three years of developing the Interactive Atlas we have not only benefited from using Open solutions, we also contributed to them, by locating bugs and helping to solve them.

In addition, all of the scripts used to process the data are openly available, through the Github repository of the Interactive Atlas. And finally, the most important reason to rely on open solutions: transparency and FAIRness. It facilitates the review of not only the data themselves, but how they were processed. All this connects nicely with the next chapter of this post: the IPCC review process.

Among the main pillars of the IPCC are transparency and traceability. To achieve this, the different drafts of the  Assessment Report are thoroughly reviewed by experts and governments. The review process includes wide participation, with hundreds of reviewers and over 78000 comments. Overall, the report was subject to three IPCC revisions: the First Order Draft, Second Order Draft, and the Final Version. At each one of these stages, the status of the Interactive Atlas was frozen, to ensure that every reviewer had access to the same information. To ease the review, the Interactive Atlas provided unique permalinks, so the reviewers could send links to specific pieces of information they were revising at the time.

Since the Interactive Atlas is a tool to support the Atlas chapter of the IPCC, it was subjected to the same level of scrutiny. One of the first barriers we encountered was the sheer volume of raw data handled by the Atlas, in the order of hundreds of TBs. This is caused by the high number of datasets and variables contained in the tool… and some specific features that add complexity to the data. A good example of this is the custom season feature, that lets you go beyond data for spring/summer/autumn/winter and select the range of months to focus on. This is relevant for example, to study monsoons, which exhibit variable seasons over the globe. This season feature alone multiplied by 145 the volume of data handled by the Atlas, due to the necessities of the datasets to be included.

In order to facilitate the review of the Interactive Atlas, we adopted the FAIR principles of findability, accessibility, interoperability and reusability. This translates into several points about the data themselves:

The first step in data processing was technical, and was undertaken by the Atlas team:

Thanks to this thorough and systematic process, the Atlas team was able to spot and mend bugs and other errors in the data, its treatment and the platform itself.

This IPCC review process forced us to multiply the number of instances we had deployed of the Interactive Atlas. We ended up with four different environments: one internal, to deploy new data, functionalities, and perform the internal review; and three of them for the reviews by IPCC, experts and governments. Having so many different environments that use a common pool of data was a big lesson for us in continuous integration. We had to create a series of jobs integrated in our Gitlab, depending on what we wanted to load into which environment, and do so automatically. These comings and goings of data across different environments was a constant throughout the project. So it forced us to develop different status monitors that let us know the state of things at every moment, across the environments. In that way, we could be time-responsive, something that was crucial especially during the reviewal process by experts and governments, when the tool experienced hundreds of simultaneous visits. Of course, this was surpassed when the tool became public.

Once the tool became public, it had a very warm welcome: nearly 500,000 in the first week, an average response time to user queries of 1.5 seconds, and the resources load at the peak of visits was around 20% of the total. Overall, very good metrics. So, how was this achieved?

Historically, in GIS systems, usually the server was in charge of generating an image that then was served into your computer. However, as computers, mobiles and other devices have become more powerful, it has opened endless possibilities. More powerful devices meant that data can be served directly to the device in your hands, and let it do the graphical work (generating the maps instead of just loading an image. This is the case for example of web-gl and other graphical libraries. In the case of climate information, this approach cannot work: the amount of information is so huge, that the device would have to do too much work… hindering the performance. In addition to that, in the case of the Interactive Atlas, the IPCC has a global reach. And that means that the Interactive Atlas should run on all types of computers: new and old, gaming behemoths and older computers with Pentiums III. This universality principle was a guiding principle during the whole development.

So, we opted for a mixed approach:

This approach also enabled us to implement interesting features, like the customisable colour legend for the user: the user modifies the values of the legend, which generates a petition to the server with the new parameters, that then returns the corresponding image.

Nonetheless, this process was not as optimal and scalable as what we expected for the tool. Imagine the peak of visits at the release, when we got 13,000 visits in one hour. Every user that entered the tool is a petition to the server, that would need to generate the image and then send it. Sure, pre-calculating the datasets alleviates part of the effort. However, despite the efficiency of ADAGUC in generating images, this process still consumes resources. So, here comes the second part of the strategy: the dynamical cache (for non-technical readers: a cache is a reserved storage location that collects temporary data to help websites, browsers, and apps load faster). In our case, the server cache stores the maps that correspond to the most requested data. Of course, the first one is a given: the landing map we show when you enter the tool. But the rest of them are entirely user-driven. If a newspaper or a social media post linking to a specific view of the Interactive Atlas goes viral, the generated image is cached, and then is automatically served to the request. Thanks to this built-in strategy, the Interactive Atlas cannot die of popularity, by avoiding generating images that are popular over and over again.

Overall these are the technical details supporting the Interactive Atlas, that are behind the swift user experience it provides. Of course, another part for that lies within the actual UX/UI of the Interactive Atlas… but this topic deserves a blog post of its own, as this one has already become too long.