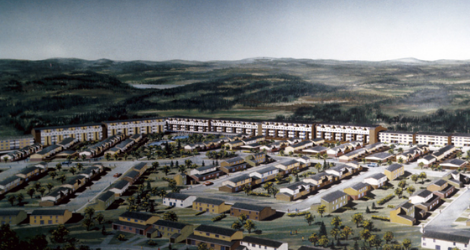 Up in northeastern Canada there’s a town with a wall-like structure that is 50 metres high, 1.3 kilometres long, and protects its citizens from the chilling winter winds. The town is Fermont, with a population of ~2500 people. And the “Mur-Écran” (as it is known by the Fermontois) is not solid like the wall in Game of Thrones. It has a more utilitarian approach, as it is composed of a school, a library, a semi-olympic pool and many other public service buildings, as well as private residences. For nearly 50 years, it has protected the people in Fermont from hostile weather. However, we wanted to take a look into its future: what does climate change hold for this gargantuan wall? Is it going to be necessary in the future… or will it remain as an architectural ode to a past climate?

First of all, we want to thank Pedro Torrijos for telling the story of the Mur-Écran on Twitter. He piqued our interest and all started from there.If you want to know more about the architecture of The Wall, read his thread. And if you prefer podcasts, the CBC dedicated an episode to Mur-Écran, The Windscreen. It tells a fascinating story that merges mining, architecture and how to design a village from scratch. However, we are going to depart from history and architecture, in which we’re no experts, and we are diving into climate, which we are more familiar with.

The current climate of Fermont

From September to March-April, Fermont is windier than usual. Together with the usual drop in temperatures in winter, it leaves a quite hostile climate in these months. The Windscreen was designed specifically to protect the mining town from the winter winds that whip the town, and to offer a safe haven for the inhabitants. If you gather all the facilities in one place, you can move from one to another without having to expose yourself that much to a chilling weather.

This becomes relevant from November through April: if you look at the temperature chart below, you’ll see that there’s a huge difference between the minimum temperature registered by the thermometers (solid blue line) and the  “felt temperature” (dotted blue line). This difference between what the thermometers say and what we feel as humans is due to the winds, humidity and other factors beyond just temperature. If you’re interested in knowing more, you can read this article about UTCI, one of the indicators used to measure the apparent temperature.SDF

To look into the future climate, we have used CMIP6, the latest climate change models available. We have adjusted their biases with ISIMIP3, a technique that reproduces well the behaviour of the extremes, while preserving the trend of the climate. In the case of Fermont, there are no significant biases to adjust for temperature-related indicators. However, for winds, you’ll see that there’s a significant bias to adjust.

Fermont is a very cold place, and it shows. On average, the annual minimum temperature stays well below 0, around -8ºC. However, in just a few decades, this could change drastically. In a worst-case scenario, it could surpass 0ºC and rise up to 3-5ºC by the end of the century.

However, the average minimum temperature tells us very little about the really freezing days, when the Mur-Ecran is really necessary as a refuge from the weather outside. Let's take a look at the colder days.

Most of us shiver at the mere thought of getting outside when the temperature outside is below -5ºC. However, for the people at Fermont, this is the case for nearly half of the year. Currently, between 170-190 days of the year are below -5 ºC. And, as you can see in the figures below, it could go down to 140 in an intermediate scenario, or even to 100 in a worst-case scenario.

At this temperature, with the winds of Fermont, you can stay outside for less than 30 minutes before frostbite starts kicking in, according to the US National Weather Service.

Currently, at Fermont, around 3.5-4 months of the year have these climatological conditions. In the future, this will most certainly go down. If we keep an intermediate scenario, only 2-3 months of the year will have this temperature. And in the worst-case scenario, it will go down to 1-2 months.

With this temperature, staying outside becomes harder. Only 10 minutes until frostbite. These harder days are not unusual in Fermont, though. Around 40 days a year they have these weather conditions. By the end of the century, however, they will go down to ~10 days, or nearly 0, depending on the climate change scenario.

Wind plays a huge role in how we experience weather. The frostbite times we were talking about in the previous sections depend on the wind that is blowing. So, we wanted to take a look at how wind speeds are going to evolve under climate change. And it seems that there’s not going to be a lot of change. However, in this case it becomes highly relevant to adjust the biases: as you can see in the figures below, the raw outputs from CMIP6 models do not reproduce the historical wind speeds for Fermont.

A timeless utility or an ode to a past climate?

One thing is for sure: Fermont is just below the Arctic Polar Circle, one of the regions most affected by climate change. After all, the arctic is warming three times as fast and the global average. So people living on these latitudes will experience heavy effects of climate change.